Posted on October 27, 2015 by BestDoctorsSydney1

One of our readers started correspondence with Dr Elizabeth Coombs, the NSW Privacy Commissioner, on 7 Aug 2015, complaining that a particular doctor wasn’t providing him with copies of his health records and information, in accordance with the law.

To cut a long story short, the doctor did mail him copies of SOME of his health records and information, but not of a particular document he needed.

So subsequently a letter was emailed to Dr Coombs, on 23 Sep 2015, the main paragraph of which was:-

He was flabbergasted! His letter had been completely misread. He hadn’t said he’d received “further copies” at all.

So he immediately sent back a letter saying:- 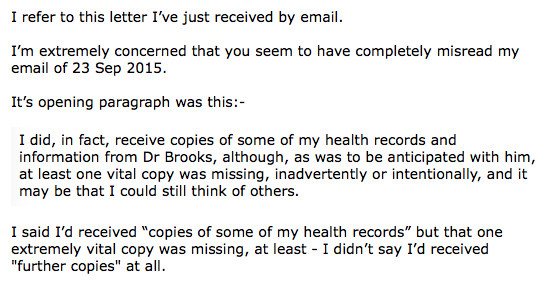 Time and again you get responses from people at AHPRA, the NSW Health Care Complaints Commission, the Medical Council of NSW, and now the Information and Privacy Commission New South Wales, when you’d expect better from school children.

And there’s not a damn thing you can do about it because no one cares – least of all the Elizabeth Coombs of this world.

If you had the option you wouldn’t continue dealing with these organisations for a second – but they are Government monoplies.

info@questionsmisc.info is our email address and questions and feedback are welcome.

This entry was posted in Uncategorised. Bookmark the permalink.